I had initially thought that January 26, 2015 was the "worst day of my life" due to my four year old's diagnosis with Type 1 Diabetes. But I was wrong. So wrong. The worst day of my life was September 16, 2016 (a year and a half post diagnosis) when I thought I was going to lose my baby due to severe hypoglycemia (low blood sugar). 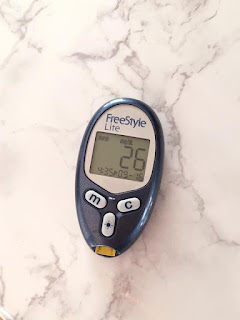 It was a typical day for Sawyer, except he did not have his CGM in due to needing a new transmitter. We did everything we needed to do at school to make sure we avoided any lows. When we got home on that day, he was starved and wanted a snack. He chose a healthy snack, a bowl of fruit with some yogurt. After checking his blood sugar and seeing that he was 155, I took it upon myself to be the responsible parent and give my child a small dose of insulin for his roughly 20-25 carb snack. If I had had the resources of the CGM, I would have been able to see that his blood sugar was most likely dropping fast and that he did not need any fast acting insulin with the snack he had. Since there was no CGM, there was no way for me to know that. After Sawyer got his snack, he went outside to play. Within 15 minutes, he came inside saying he was low. I gave him a 15 carb popsicle. As he was eating his popsicle, I was preparing dinner. I was talking with him and noticed that he started talking really funny. I turned around and saw that he was slumped over in his chair at the table and that he had dropped his popsicle on our floor. My heart sank. I rushed to him and held his weak body in my arms and screamed for him to be more alert. He started shaking and tried to get words out but couldn't. I knew immediately what I had to do. I didn't have a chance to cry or act scared. I laid him down on our kitchen floor, put a dish towel under his head, and rolled him over to his side. I immediately grabbed two juice boxes and his glucagon pen. For those of you who are new to this, glucagon is a hormone that is made in the pancreas that brings your blood sugar up when it needs to. Since Sawyer's pancreas is dead, he needs both insulin (to bring blood sugar down) and emergency glucagon (to bring blood sugar up). I immediately gave him his first juice and checked his blood sugar to make sure he needed glucagon. His meter read 26. A low blood sugar is anything under 70. I measured out the glucagon, drew it up, and injected the needle into his abdomen so it would work sooner. My baby was still shaking and his eyes kept rolling back. I gave him the second juice box, then picked up up and held him and kept talking to him and made sure he wouldn't fall asleep or pass out on me. It took 5 minutes for him to start to act sort of normal again. Longest 5 minutes of my life. It took him about another 20 minutes to regain some energy again. And after a full 30 minutes after the glucagon injection, he was back to normal. Blood sugar of 110. I held him a little longer than normal that evening. Once he went to bed, I balled my eyes out. I felt so guilty. I felt like a failure. I felt defeated as a mother and caretaker of a child with Type 1 Diabetes. I kept replaying the scene over and over in my head and thought, "what if I hadn't thought to get the glucagon pen?" "What if he hadn't come inside and told me he was low?"

This wasn't easy to write. The truth is, I still feel guilty. This is something that I have nightmares at night about still. Something that I have had to talk to doctors about having anxiety over. This is something that I pray over and over to God that it will never happen again. I thank God every single day that he gave me the strength and wisdom I needed to get both Sawyer and myself through those tough moments. I thank him for giving Sawyer a fighting chance. Sawyer has so much life in him and he is meant to live it to the fullest. I am always praying for a cure, but also for continuous strength and wisdom that it takes to take care of a child with this life threatening autoimmune disease.

This post is sponsored by JOHNSON’S, however all thoughts and opinions are that of my own. My kids LOVE bath time at our house. I...